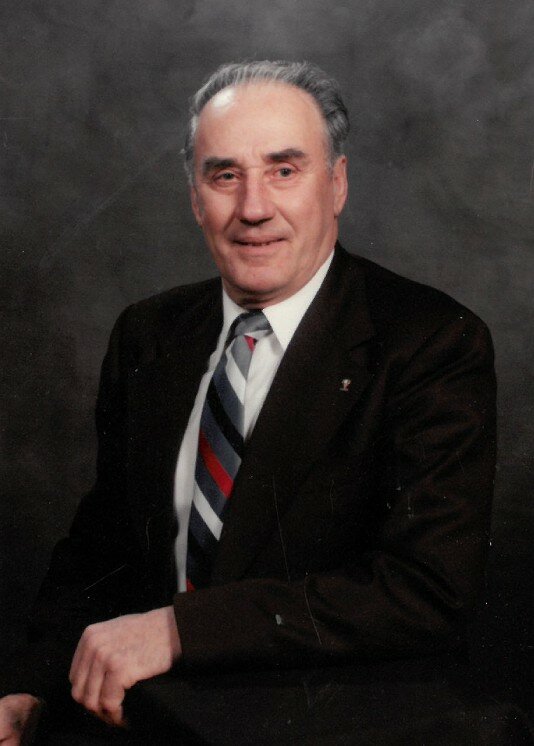 Please share a memory of William to include in a keepsake book for family and friends.
View Tribute Book
MYRONIUK, William (Bill) February 23, 1924 – December 31, 2021 It is with profound sadness that the family announce the passing of William (Bill) Myroniuk, on December 31, 2021, at the age of 97. Bill will be remembered as a dad, gido, and great gido. He leaves behind a daughter Shirley Kobewka; son Brian (Cheryl) Myroniuk; eight grandchildren and ten great-grandchildren. Predeceased by his wife Jean in 2020; daughter Linda Porter (Don) in 2010; and son-in-law Ed Kobewka. Bill was born on a farm west of Derwent. His parents Dmytro and Helen had eight kids; three sons and five daughters. Bill was the third oldest and predeceased by all of his siblings: Steve Myroniuk, Anne Smith, Mary Eliuk, Kate Triska, Jean Velechko, Nettie Hansen, and Mike Myroniuk. Bill began his apprenticeship as a carpenter at fifteen years old from his uncle Onufrey Myroniuk. He married Jean Ewanciw in 1951 and began farming across from his parents. Later they bought a farm southwest of Myrnam where they raised their three children. Bill as a carpenter built plenty of block basements, over forty homes and around seventy-five sets of kitchen cabinets in Myrnam and surrounding area. He was a very hard-working man and played just as hard. In his retirement, he moved from Myrnam to Vegreville. Bill enjoyed pool, cards, bingo, curling, and playing his violin. Due to covid restrictions, a private service was held at Riverside Cemetery in Vegreville, Alberta. Memorial donations may be made to the Vegreville Sunshine Club.