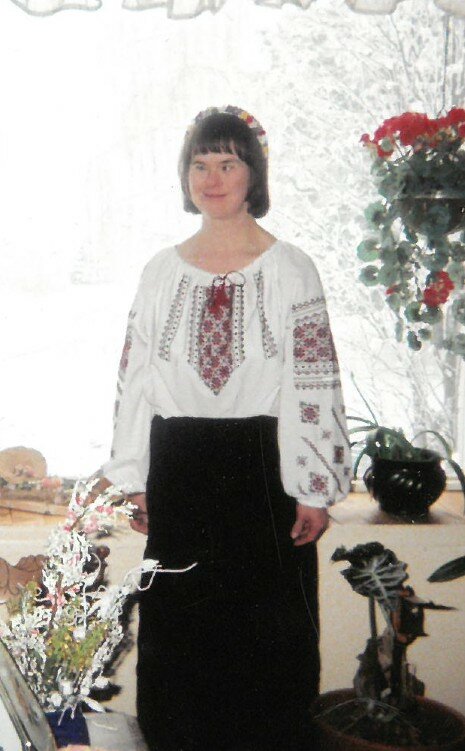 Please share a memory of Rosanne to include in a keepsake book for family and friends.
View Tribute Book
BOHAICHUK, Rosanne Margaret (Maggie) January 26, 1968 – June 29, 2022 Rosanne was born on January 26, 1968, at the Vegreville hospital and after a three year painful battle with numerous health issues and losing her sight, she lost the battle June 29, 2022 in the Lamont Hospital. Rosanne was a healthy, rambunctious, curious girl, always wanting to do everything her four older siblings did, and their love of their cuddly loving baby sister made her a happy, busy child. She never had time to just “sit around” but demanded WE “do something” constantly. At age five she attended kindergarten in Vegreville. The Dr. Cairns teachers placed her in classes where her talents were cooking classes – Veg Comp, music classes, sign language at Lakeland College where she scored the highest marks, beating other “not handicapped” students. Her love of music was legendary, as she could play from notes, remembered ALL the words, and enjoyed all music from classical to country and rock. Elvis was her favourite and Celtic music came next with her learning highland dancing and often performing in various kilts. A neighbour who was from Scotland provided “Maggie with her dress. School trips included Disneyworld, Expo, Calgary Special Olympics where she received four medals. She took a cross Canada train trip to Nova Scotia where she stayed with a family at Peggy’s Cove on a student exchange, plus many excursions throughout Alberta and British Columbia. At the age of fifteen, Rosanne left the Vegreville residence and has lived at home (Innisfree) where she was homeschooled, worked at Petro-Can kitchen, then was a partner in “Creative Catering” and “Woodland Creations.” Rosanne volunteered at functions in the community, helping in the kitchen, decorating, and just bringing laughter to all around her. Her spontaneous bubbly laughter and her unbelievable sense of humor was contagious. Her love of fishing and camping took her to many destinations – deep sea fishing in the Gulf of Mexico, Hoida Guai, South Pacific, Northern Saskatchewan and of course the Innisfree Trout Pond. Rosanne has been a member of the Fish and Game for many many years and won trophies almost yearly. Rosanne has travelled extensively from watching whales in Alaska to the South Pacific Cook Islands, all of B.C. most of Alberta and Saskatchewan, most of the U.S. and Mexico. In Florida she watched lift-off at NASA and her love of “Star Trek” movies led her to have a movie made in Disneyworld, Florida, where she stars. In Hawaii she was the guest of honor at the Helemeno Plantation run by the handicapped and treated like royalty. She leaves to mourn her mother, Louise; sister Susan (John) Hughes; brothers Mark (Elsie), Bohdan (Caroline); nephews and nieces Eric (Shelene) McIntyre, Scott (Kelly) McIntyre, Ayla and Sophie McIntyre; special friends Julie and Rosemary. She was predeceased by her father Paul and brother Andrew. Rest in peace dear angel, you have suffered enough for the past few years, yet you would still smile. Yes, you were “different” and that was awesome. You were loving, giving, honest, had a pure heart and you saw beauty in everyone and the world. Of course, you said Jesus was your hero. You will be deeply missed and mourned. You have already “Celebrated Life” so now we need to mourn your passing and yes we will cry. A Public Viewing will be held on Tuesday, July 5, 2022 from 6-8 p.m. at Autumn Rose Funeral Home. A Funeral Service will be held on Wednesday, July 6, 2022 at 11:00 a.m. at Autumn Rose Funeral Home with Norma Barber and Joan Anderson officiating. Interment to follow in the Innisfree Cemetery. Memorial donations may be made to “Stollery Children’s Hospital - Down Syndrome Clinic”
Tuesday
5
July