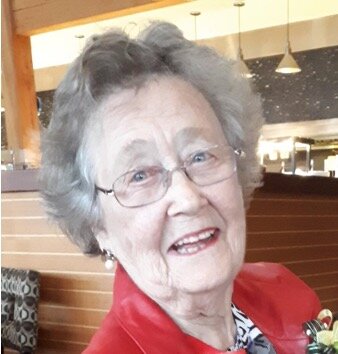 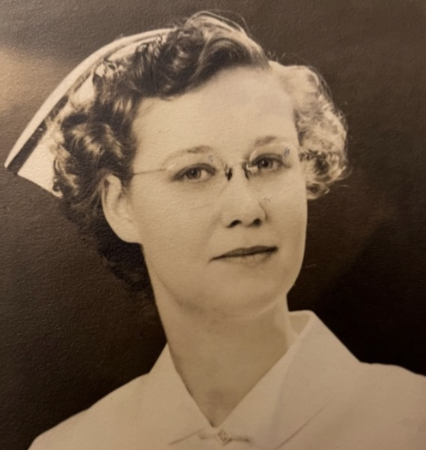 Please share a memory of Joan to include in a keepsake book for family and friends.
View Tribute Book
SANDERSON, Joan Alma (Corbould) 1929 – 2022 JOAN ALMA SANDERSON (nee Corbould) passed peacefully on November 17th, 2022, surrounded by love and prayers, and completely on her own terms at the age of 93. Mom (Joanie, Auntie Joan, G’ma, GG’ma, the Hot Sauce Granny, to name but a few) fought valiantly, although her health issues over the past year may have taken her strength, her fighting spirit remained. Fiercely independent, she was in control to the end. Born in Kamloops B.C. with twin sister Margie, the “most unalike twins” were the middle of the six children of Charles Edward Bernard and Alma Hetty Corbould. Joan is survived by her children: Penny (Stewart) Holmes, Ian (Sharon) and Margie (Jim) Moore of St. Albert, AB, and Frank (Susan) and Debbie (Marek) Godlewski of Rothesay, NB; grandchildren: Geoff (Lori), Stephen (Linda), Kim (Matt), Anna, David (Ashley), Amy (Damien), Mary-Claire (Ian), Bevan (Katie), Meighan, Kelsie, Aleksander (Shannon), Elise (Chris), Adam (Moriah), Colan (Cassiya) and Evan; and great grandchildren Adalyn, Annabel, Emmett, Julia, Rowan, Emmy, Leo, Marceline and Wally; Brother Brian (Barbara) Corbould of Port Coquitlam and sister Margaret Francis of Coquitlam. She will also be missed by many nieces, nephews, cousins and friends. She was predeceased by her parents and sisters Betty McGregor, Norah Klett and Pat Hasselfelt; in-laws: Jim, Colin, Inky, Cy, Gordon, Mary, Wineva, Bruce, parents-in-law Lundy and Margaret and her former husband Lundy Sanderson. A proud graduate of Kamloops High School (1947) and the Royal Jubilee Hospital School of Nursing in Victoria (1951), Mom was committed to a life of caring and service. She was a lifelong volunteer, serving with the Jaycees, the New Westminster YWCA, SHARE and the Anglican Church of Canada. Joan was made a member of the Order of the Diocese of New Westminster in 2013. Returning to work after raising her children, she nursed at the Como Lake Hospital in Coquitlam until her retirement in 1996. Mom continued her volunteering at St. Laurence Church and the SHARE Food Bank into her 90’s. She made a point to say thank you, to welcome a stranger - and to be sure that her children and grandchildren learned to do the same. Always up for an adventure, Joan travelled the world with family and friends over the years. Family was her life and she travelled throughout Canada to visit her children and other family. Wherever she was, she made friends easily, was always interested to learn from others or share her sense of humour. In 2013 she began acting in commercials, most notably in her hot sauce commercials. Although she didn’t like “that word”, she did enjoy it on most things. We thank all of you for your thoughts and prayers and kind words to mom over the past year, either in person, by video or in messages. She truly appreciated them. We would also like to thank those who accompanied Mom through her challenges – the staff of Parkwood, Coquitlam; and River Ridge and Comfort Keepers, St. Albert; and the care teams at hospitals in Coquitlam, Edmonton and Saint John, NB. A celebration of Mom’s life will be held in Coquitlam, BC at a later date, when the sun and flowers are out. In lieu of flowers, memorial donations may be made to the BC Cancer Foundation, the MS Society of Canada, the Alzheimer Society of Canada, or to your local foodbank.